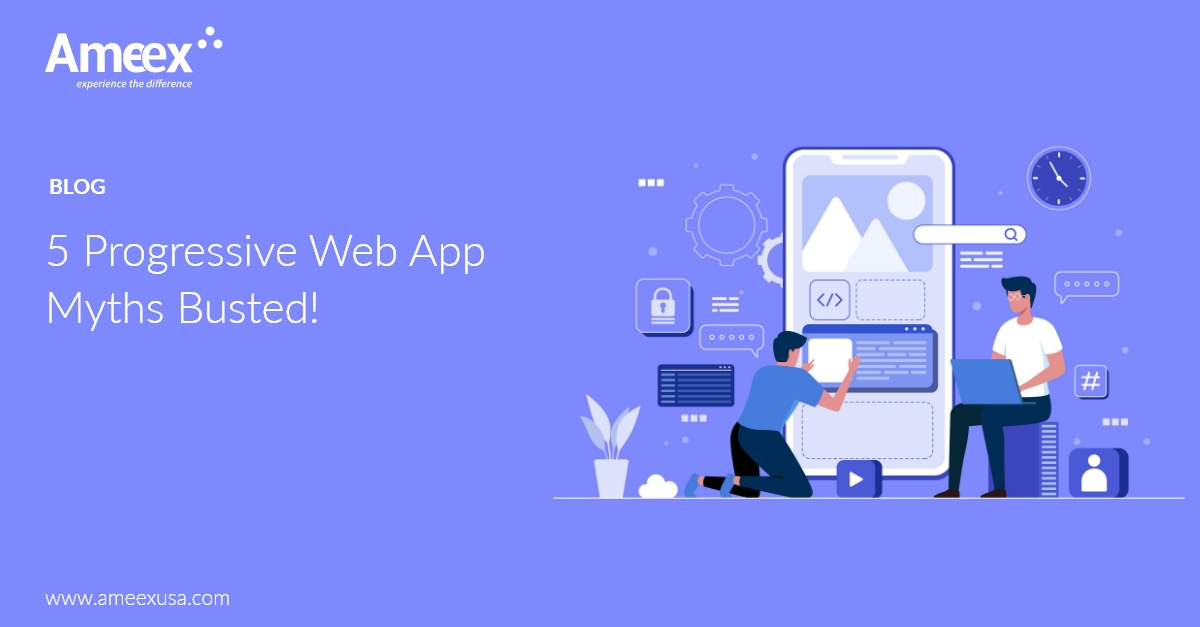 Authored by Ameex Technologies on 22 Feb 2022

Progressive Web App (PWA) is the new buzzword of the tech world. Brough to the forefront for the first time in 2015, this piece of app-like web technology has suffered its fair share of misconceptions in the market. To help you make the right decision on PWA development, we target 5 myths about it and help you understand the reality. Read now!

Myth #1: PWA is meant only for mobile

Fact #1: Progressive Web App, by nature, can run on any device that supports browser and offers a fully operational, app-like experience. PWAs are generally described as ‘mobile-only’, ‘reliable’ and ‘fast’, encouraging the people to believe that it may not be able to run elsewhere - which is not truly the case. Try to use a PWA and you’ll see its advantages.

Myth #2: PWA is not available on app stores

Fact #2: You may assume that PWAs are overlooked but you are certainly mistaken! Progressive Web Apps are desired by many tech entities. Brands such as Google and Microsoft focus immensely on it and target software delivery via it. PWAs can be published anywhere. They can be available in countless app marketplaces. Although not quite visible, PWAs are available on Google Play Store.

Fact #3: Progressive Web App development can be assumed to be high but you will be surprised to know that it costs nearly the same as a website. Its cost is not astronomical! When we compare it to the price of native applications, it proves to be lower. This is simply because there is no requirement for the development and maintenance of separate app versions (iOS and Android). PWA is nearly 99% lighter than a traditional mobile app. You can count on it unquestionably!

Fact #4: PWAs are technically websites, so they tend to have significantly more reach than any native mobile application or responsive website. They have the advantage of being discoverable on both app stores and search engines at the same time. Creative businesses opt for PWAs as they aim to expand their web presence. Do you want a better ROI? Invest in a Progressive Web App.

Myth #5: PWA is unable to use hardware functionalities

Fact #5: PWAs’ capabilities have come a long way in recent years, and typical Chromium-based or Android-based PWAs can now gain access to your device's hardware features just as well as native mobile apps. There’s still room for improvement as there are some hardware features that have yet to be supported, such as the ability to access contacts and send SMS/MMS.